Water crisis deepening in Bushbuckridge, Part 2: What could be happening?

Since 2016 the climatic weather conditions have become very unpredictable and are behaving totally differently from the usual season to season occurrences and patterns. Now the weather is either extremely hot, randomly windy or if it rains it is mostly disastrous.

Well I agree that climate change and global warming affects us, but I’m definitely not sure if the situation in Bushbuckridge is being directly and solely affected by the changing climatic conditions only. I doubt it. Personally I doubt because both the Inkomati Usuthu Catchment Management Agency (IUCMA) and Bushbuckridge Local Municipality (BLM) said that the current level of Injaka Dam is at about 49 % (November 2019). The IUCMA made this announcement on the 15th November 2019 during the Sabie Catchment Management Forum’s (CMF) bi-monthly meeting which took place in Skukuza Community Hall. Then on the 19th November 2019, the BLM made an announcement about water rationing and they also announced that water levels in the Injaka Dam were below 49 %, hence the rationing.  Now I wonder if BLM did not get the information from the IUCMA and how accurate that information is;  its still a mystery because 49 % would certainly not result in such severe water shortage. At 49 % full the dam does not warrant drastic water saving measures like rationing.

Above all there has been an increase in water shortage protests since the beginning of July, which coincides with the time when BLM took over the bulk water supply from Rand Water. Could it be that the BLM is not able to provide effective bulk water supply to the residents of Bushbuckridge?  Could it be that the BLM lacks the necessary skills to render this service to its citizens?

In terms of the water services, 1998 as amended; the municipality is designated as water service authority and the termination of rand water was done in the interest of the community members. The municipality will be absorbing some of the rand water staff members to ensure smooth and uninterrupted supply of water.

We apologize for the inconveniences caused by this.

I wonder why the municipality did not give any reasons for the termination of Rand Water services.  When they say that they have terminated the services of Rand Water for the best interest of the community, what do they mean by such a vague and dishonest statement? Did they consult the community about terminating the services of Rand Water? Certainly no because early this November there was a community march jointly organized by Bushbuckridge Chamber of Business, Sanco and SACP. Apparently they marched to BLM complex and presented a memorandum demanding that Rand Water be reinstated and the Executive Mayor to be sacked.

The municipality acknowledges and notes the dirty water coming from Shangaan Hill Reservoir. For safety precautions, the municipality has resolved to close the water reservoir with effect from Monday, 26th august 2019 to 07th September 2019 in order to allow cleaning and routine maintenance on the reservoir.

Members of the public are urged to exercise patience whilst the municipality works around the clock to remedy the situation.

For more information on the deployment of water tankers, please contact the Ward Councillor Cllr Thembinkosi Ngomane on 060 506 3077 or ward committee members.

We apologize for the inconveniences caused by this

It is not common to have “dirty” water coming out of taps, actually I know of this problem when they are fixing a burst pipe. Secondly I don’t understand why it would take such a long time to clean two reservoirs. How one can justify over 10 days of cleaning only 2 reservoirs? These are the things and behaviour that make me suspicious of what is said.

WATER SUPPLY INTERRUPTION DUE TO PIPE BURST
The municipality would like to inform members of the public about the cut-off water supply due to a pipe burst earlier in the morning. The following areas will be affected:
§ Masana Village
§ Police Station
§ Mapulaneng Hospital
§ Bushbuckridge Complex (Old complex and Twin city)
§ College View
§ Malaining
§ Mphenyatsatsi Village
§ Forest Lodge

The municipality will keep members of the public updated about the progress made, water shall be restored back as soon as the fixing process is done.

We apologize for the inconvenience the situation has caused.

I wonder why they don’t tell us exactly where the pipe burst is and from my opinion they should also be able to estimate the time they might take to fix these problems because it is their daily lob.

We apologies for the inconveniences.

I don’t have any knowledge about routine maintenance work but I think if it is done from the Injaka Water Treatment Works (IWTW), it should probably affect the whole area of jurisdiction. I don’t know, I might be wrong. 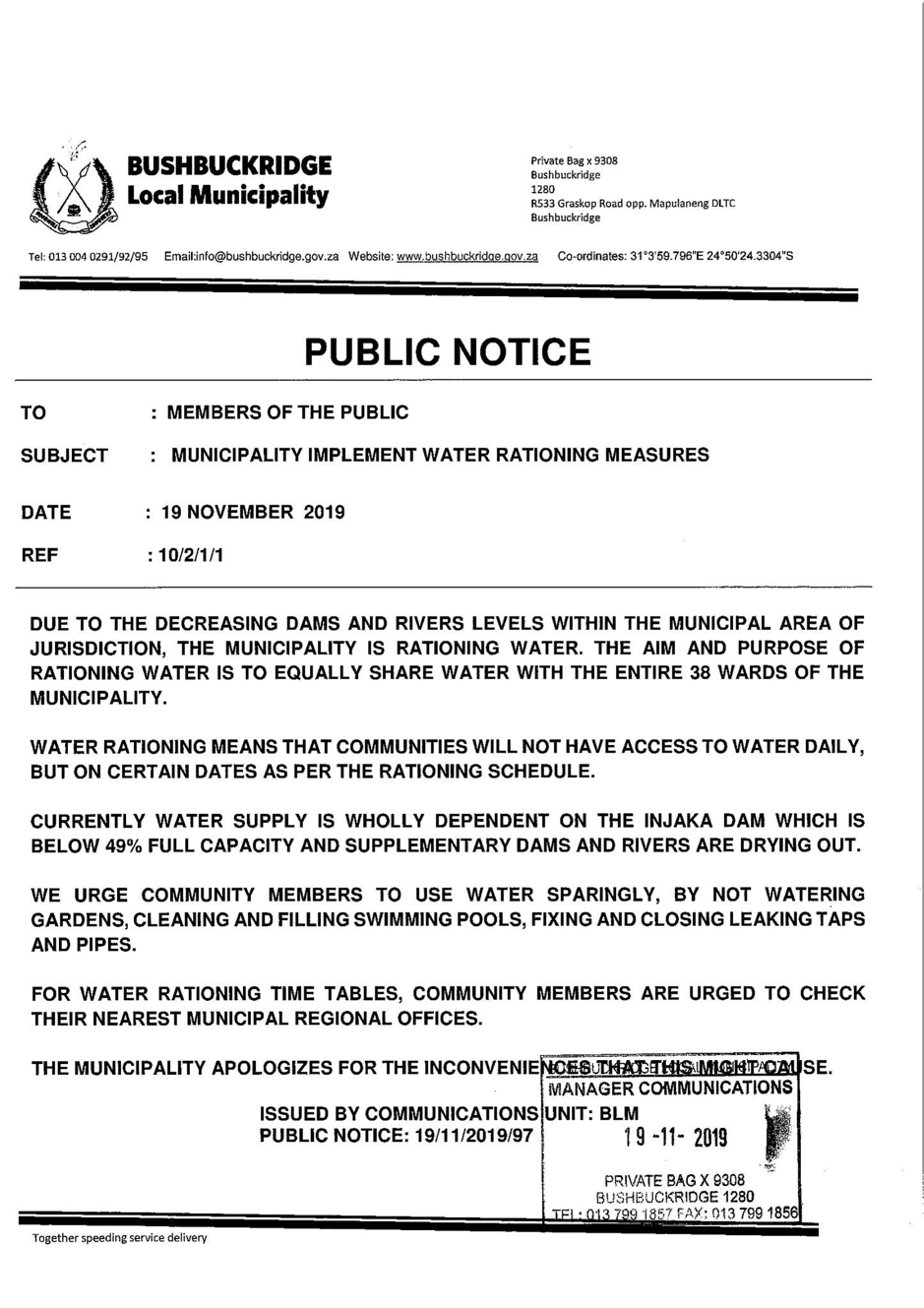 Well I wish I could understand as to how and why should BLM impose such restrictions where as the levels are still at 49 %. In 2016 around this time of the year, the water levels at the Injaka Dam were at about 28 % but I don’t remember any rationing that was imposed, actually nobody said anything about the levels until we had rain. They only reveal that after receiving rain. 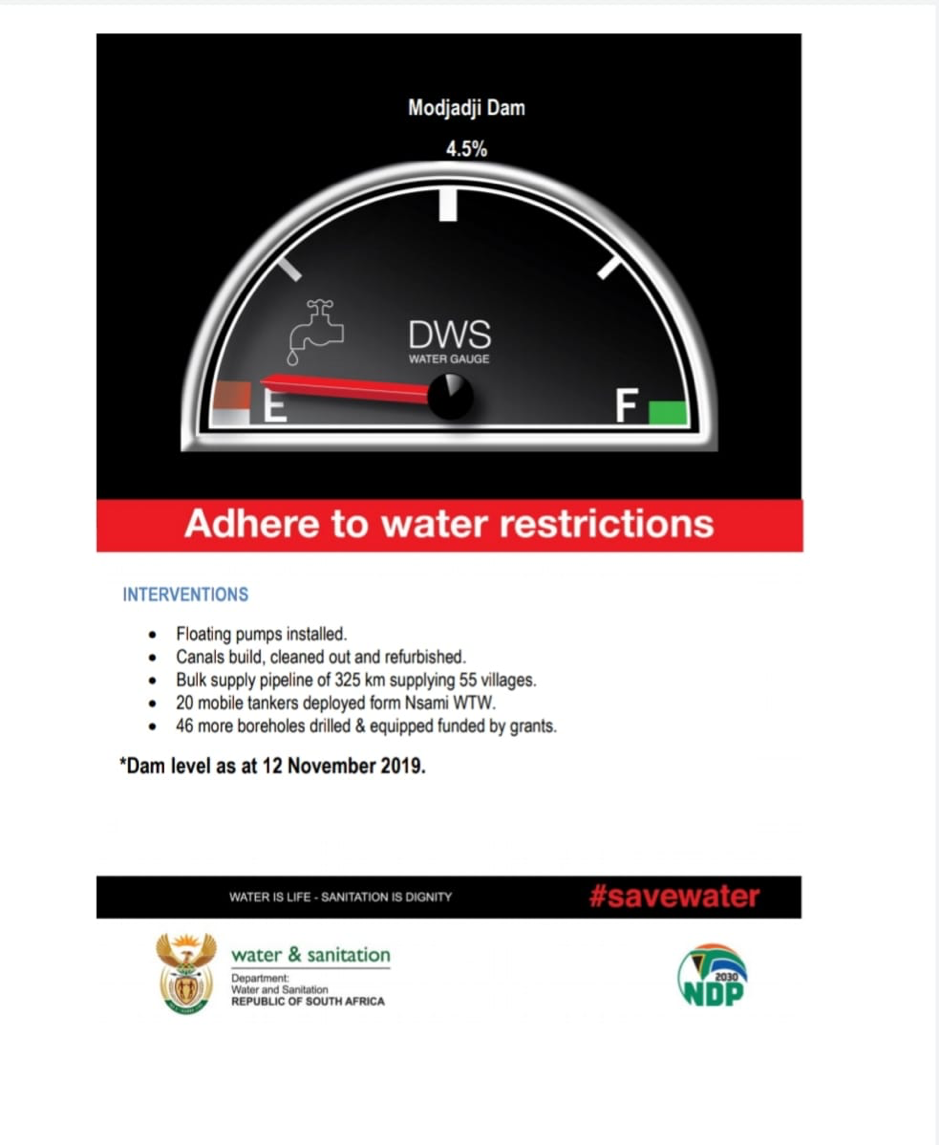 This is Modjadji Dam in Tzaneen understandably imposing restrictions at 4.5% empty, not at 49% full.

Possible factors that might contribute to water shortages in Bushbuckridge.

I fully agree that there are  impacts of climate change, but I don’t think that it is the only factor contributing to water shortages in Bushbuckridge.  Climate change could either cause drought or dangerous rainfall that might cause serious damage to infrastructure and the environment.

One can hardly separate lack of service delivery from corruption in Mzansi.

Although BLM said that they will absorb some of Rand Water staff to ensure efficient running of the plant, I still don’t know who was retained. This could well be the reason that “dirty” water was reported coming out of taps.

Probably the main chief culprits in Bushbuckridge. An average gum tree uses at least 120 litres of water a day. Most rivers in Bushbuckridge originate from the Drankensberg Moutains, both the Sabie and Sand river sub-catchments are part of this world famous mountain range. Bushbuckridge lies below this Drakensberg Mountains, and it is densely populated and was declared one of the Presidential Nodal Points because of high poverty levels. From Moholoholo / Mariepskop escarpment throughout to Graskop, that area is over-burdened by the establishment of large scale industrial timber plantations (ITP’s), mostly the ever thirsty, invasive, alien gum trees. Let’s take for instance that the whole mountain has got about 500 000 (which in reality could be millions) gum trees. Now to try and quantify the impact, we can use the example, which could be:

= 60 000 000 litres per day (60 ml/d) or more could possibly be lost through gum trees. That is a massive amount water to be lost daily non-stop. The biggest challenge is the fact that no one can impose water use restrictions on gum trees, no matter how severe the situation is, they will certainly keep on taking the same number of litres a day. We can’t control these plantations in terms of daily consumption and because they have strong, deep root system that can pierce through the water table and steal from the reserves.