It is towards the end May 2020, almost two months into the lockdown and the reality of the lockdown toll is starting to rear its ugly head as hunger slowly creeps in. The promised R350 social relief of distress grant is still a dream to many of us as only ten (10) people are reported to have been paid out of several millions that applied. The government-promised food parcels are not forthcoming and the anger is building up, most people are stressed. This is a very stressful moment for many people and families. Hunger seems to be more of a serious threat than the Coronavirus itself now. People are engulfed in fear of starvation on top of the media-promoted panic fear of the COVID-19 pandemic.

As hope was fading away for many people in the Sekhukhune region, overwhelmed by anxiety, sadness and disappointment, most activists that were part of the social learning course Changing Practice,  who are members of Women Affected by Mining United in Action (WAMUA) were already communicating with the Mining Affected Communities United in Action (MACUA), which WAMUA is part of, to assist and support the poorest members of our communities. MACUA through WAMUA collaborated with Ward Councillors in identifying the most vulnerable members of our communities. WAMUA community coordinators were asked to identify at least twenty (20) households per community and activists visited these identified households to donate food parcels and also sanitary dignity packs for women.

The activists also engaged with the municipality regarding the shortage of water in areas like Sekhukhune and water tankers are now supplying water at least every Sunday to the communities that are without water. Tokelo Mahlakoane, who was part of the social learning team that graduated in late 2018, said, “We are not just distributing food but we are also donating dignity packs to women and make it a point that they have water to wash their hands”.

The Covid-19 pandemic is a recent flu-like batch of illness that attacks respiratory organs and eventually interferes with the breathing ability which if unchecked could result in death. The pandemic has already caused lot of deaths across the world. For one to be safe from infection, which is mostly airborne, we should drink water regularly, wash hands with soap for at least twenty (20) seconds several times. One is also expected to wear a face mask whenever in a public space and to sanitize hands with alcohol based solutions regularly. Most of the countries responded to the pandemic by a series of unusual restrictions that limited social contact by implementing “lockdowns” and curfews. The locking down of countries resulted in many people facing hunger, especially the poorest of the poor who depend on daily selling of products to people to able to put bread on their table.

The lock down soon became a nightmare to most of us that could not stock-pile food because of financial difficulties, water shortages and hunger started to be more dangerous than the virus that we are said to be saved from.

Rural communities are the most vulnerable and neglected people in the whole world. The government promised to give needy people food parcels for the duration of six (6) months during the COVDI-19 outbreak to help and save people from dying of hunger. As usual the food parcels meant for the poor from the government were stolen by politicians and municipal workers. Beside the corruption of the officials, the government was not going to be able to cater for all the needy people based on the laziness of the municipal officials.

NGOs in South Africa are known to be a proactive movement advocating against certain unethical practices either by government or industries, but this time around civil society is up to something very special. They did what the government failed to do:  they donated food parcels and other important hygiene products. These youthful activists refused to be dormant and idling during the lock down, instead they continued serving their communities, in a slightly different way from every day practice. This time around they are “essential volunteers” risking their lives distributing food parcels and other essentials to their communities.

NGO’s in most countries took up the challenge and tasks of donating and distribution of food parcels to their communities during the COVID-19 outbreak. In South Africa it is time for the ANC-led government to recognize and applaud the good job done by these environmental activists. The government should learn that we are not enemies with them as public interest activists. We are honest and concerned with the issues we raise. We are concerned about the future of our children with levels of environmental destruction.

In eMalahleni and Sekhukhune, the Changing Practice participants took time from fighting ill deeds of mining companies and other industrial activities to offer humanitarian services to the same people they are defending from exploitation. Today they have saved lot of people’s lives with these food parcels. 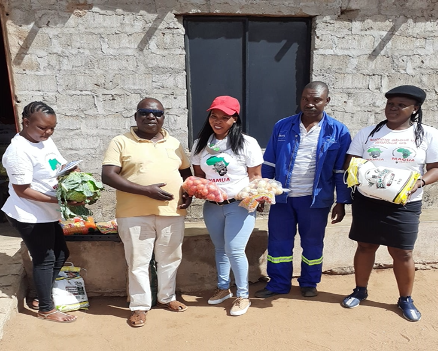 While activists are busy volunteering their time and energy to feed those that are unable to fend for themselves, their counterparts globally are doing the same. Bravo to these beautiful souls. People like hawkers are directly dependent on other people buying from them, so in this lockdown it is impossible to earn anything because people out and about are not as many as they used to be prior to the COVID-19 outbreak. To date civil society organizations have provided food to many more families than the government. That is a pretty good job from these NGO’s and many kudos to the activists that are continuing to risk with their lives during this deadly pandemic. This action of Ubuntu from the civil society reaffirms the position of NGO’s quest to improve the lives of the masses.

As a previous participant of the social learning Changing Practice course, I’m proud of the last batch of social learners as they are hands on helping with the food parcels distribution process. 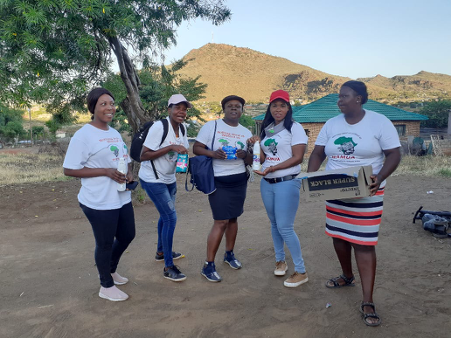 Taking care of fellow women during COVID-19. Second from left and right are graduates of Changing Practice, Tokelo and Eustina

The opinions expressed in this article are those of the author.